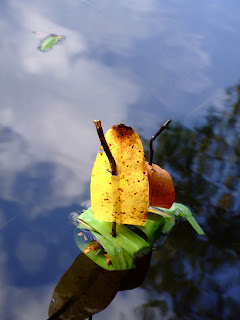 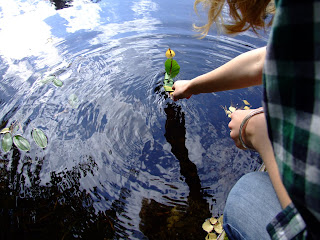 I'm a bit of an autumn geek, I love the food and colours this time of year. Chris and I went to Faskally woods yesterday near Pitlochry and took it upon ourselves to have a 'boat-out', which I won :)

He who builds the best boat wins and it must be from natural materials. Here is Chris' 'Majesty'. His re-fashioned and more successful version. You may note that he copied my vertical sail idea!

My little boat was christened Chopper, after the rabbit we met later that day. It was such a relaxing way to spend a sunday, although our peaceful but competitive walk was followed by pretty mangy food from Pitlochry, those chips were ming! And the fudge was even worse! 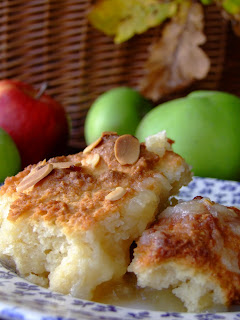 However, this morning I baked a cobbler for a friend at work who has never lived (having never tasted let alone heard of a cobbler). It's similar to apple crumble but instead of the crumble topping you make simple scone like dollops with ground almonds, resembling a cobbled path. Apples are used mainly but brambles, blaeberries, rhubarb and plums would taste yum in this too. As soon as this photo was shot the whole plate had been devoured! I love stewed apples, mmm.
It's another of Hugh Fearnley-Whittingstall's recipes so if anyone wants it let me know and I'll send it on...
Never ever use elderberries! I was so excited about baking with them as there heaps of them around about my flat but my word they are bitter. I was so dissappointed as they looked so pretty with their little garnet coloured berries. I later read somewhere that they are best used for jams and cordials etc, typical!

what a beautifully autumnal post! i love the boats, well done you on winning, haha. i bet chris loved that.

mmm, your baked delights looks yum. hope they were enjoyed.

Hi Fe bet you didn’t expect to get a comment from me! I love your blog and will look up and try some of your recipes. I was thrilled to see you enjoyed reading two of my favorite books The Time Travelers Wife and Captain Corelli’s Mandolin, if you haven’t all ready read it might I suggest The Book Thief by Markus Zusak its worth looking at for the cover illustrations if nothing else. Has Lau told you her exciting news? She is off to Australia in March to work for six months we are all going to miss her terribly but what a fantastic opportunity, talk to you soon Love Anna xxxxxxxxxxxxx

Hi, my name is Steven McDougall and I work at a shipping company in Argyll. I just wanted to comment on how professionally made these boats look. Especially the one in the first image - that's a beauty!! 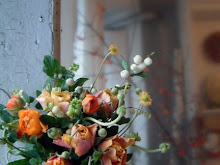 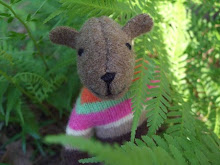 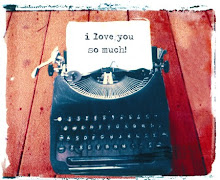 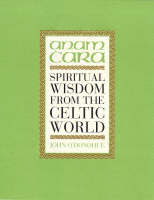